Of all the Jeep models, the Jeep Patriots were unique and quite different compared to the others. It was first available in the market in 2007 and earned huge success but was discontinued a few years later. But, what is fantastic is you will find this vehicle on the road today. The reason? It’s all about its affordability which makes it different from other Jeep models and SUV brands.

But why are Jeep Patriots so cheap? This article digs deep into the Jeep Patriot’s reasons behind its affordability and fair price. Our team also gathered other information that makes this vehicle more economical compared to the others. We will also find out why it was popular during the time it was introduced and all the other aspects that make this vehicle unique compared to all of the Jeep models.

Jeep Patriots: Why so Cheap?

The Jeep Patriot is cheaper when compared to other models because it was the company’s entry-level vehicle. It is a good but basic utility vehicle with a 4×4 capability and a reasonable MPG and cargo space. The Jeep Patriot was a small compact SUV with lesser features, a basic engine, and a basic interior compared to its more expensive counterpart. I feel that the vehicle was perfect for people who were looking for a daily driving car and not looking to spend a lot of money.

The Jeep Patriot was not a luxury vehicle. It was meant to be an entry-level SUV that was very competitive with its competitors with a similar price range. It uses a small-sized engine which means that the manufacturing cost was low. The Patriots use an inline four-cylinder engine with 2.4 liters in size which makes it run just enough, not slow but also not fast.

The interior design of the Jeep Patriots is straightforward in terms of its design. It fails in comparison with the more expensive models. For example, the windows and doors are powered manually, which means that these vehicle parts can be unlocked by manually pressing the buttons on the inside of each door. All in all, The Jeep Patriots does not come with special features that make its pricing goes up. It is a simple yet effective vehicle for daily use.

Is Jeep Patriot a Good Car? 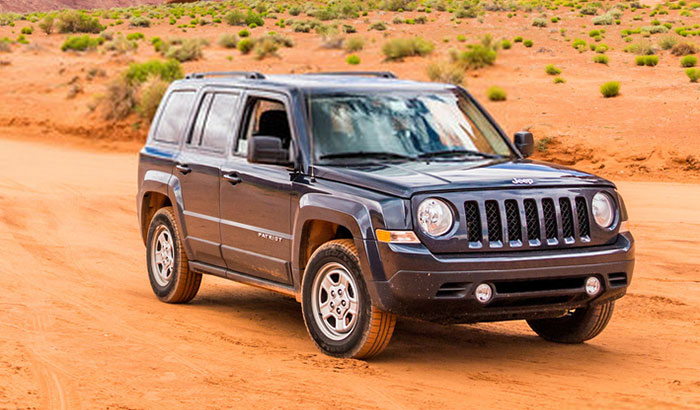 During the early years of its release, the Patriots received overwhelming support from the public because of its affordability, safety, and performance. To which I can definitely say that from the moment this vehicle was first released in the market until now, the Jeep Patriot is a good car overall. The Jeep Patriots are worth every penny you will spend, but like other vehicles, there are different upsides and downsides to having the most inexpensive car in all Jeep models.

The Jeep Patriot features an electronically controlled all-wheel-drive system that offers excellent ground clearance and stiffer springs. Stability and traction control and anti-lock brakes were all found on each model of the Patriot, making it good enough to be used on off-road driving. With that said, this vehicle also has its own positive and negative attributes, which are summarized below:

The Jeep Patriot was very popular for its affordability in all of its models. In fact, if you are not soo concerned with all the premium features inside the car, this vehicle is the perfect fit for your driving. There will be no premium features but just all the essentials you need if you want to provide a good driving experience without the need for additional features.

The reliability was also one of the main assets of this inexpensive vehicle from Jeep. In fact, this is a common upside of many Jeep models, and the Patriots are not an exemption. Even though it was built with lesser features, the vehicle still provides strong and steady off-road driving but is still easy to use when driving on regular roads.

Another upside of using the Jeep Patriot is its easy usage feature. It only comes with a simple control panel It does not come with those extra buttons and controls usually found on the more expensive vehicles. The advantage of these lesser features is they keep your focus all the time and do not worry about those additional features that you need to be familiar with in the first place. The Jeep Patriot is all about fun and pure driving on the road.

The Jeep Patriot was far from perfect, and there were some issues and complaints from owners that were raised over the years. One of which is the water leakage problem, seemingly able to penetrate the cabin quickly. The dome light and the ceiling was the weakest part, and it is recommended to seal the roof immediately after purchase or else you will dealing this issue consistently as time goes by.

Another weakest link on the Jeep Patriot was the two-piece fuel tank. The connection between these two tanks was made through a transfer tube which can malfunction easily. This part is also the reason for the vehicle’s stalling at low or high speeds, as indicated in many complaints from the owners.

Where is the Jeep Patriot Manufactured?

The Jeep Patriot was manufactured in Chrysler’s assembly plant located in Belvidere, Illinois. The production of the vehicle started in 2006 for the introductory model, which was released in the market the year after. This vehicle was built along with the Jeep Compass and is of the same GS platform developed by Chrysler and Mitsubishi. Apart from Renegade, the Jee[ Patriot is still one of the most affordable SUVs in the United States.

Why are Jeep Patriots so cheap? There are many reasons why this vehicle is inexpensive compared to other Jeep models and other SUVs in the market. For one, this vehicle has a simple design with limited features but still offers the reliability and steadiness you need when on the road. This vehicle also keeps your focus on your driving with the absence of advanced features and functionalities found in the more expensive vehicles.